This Northern North Sea seasonal experiment has been carried out in the framework of the PROVESS (PROcesses of VErtical mixing in Shealf Seas) project (MAS3-CT97-0025, 1998-2001) which has been funded by the European Communities MAST-III program. The observations in the Northern North Sea were carried out in September and October 1998. Here, a period of 20 days from October 7 - 27, 1998 is simulated. All forcing and validation data have been carefully processed from observations during this PROVESS-NNS experiment. [caption id="attachment_525” align="aligncenter” width="640”] 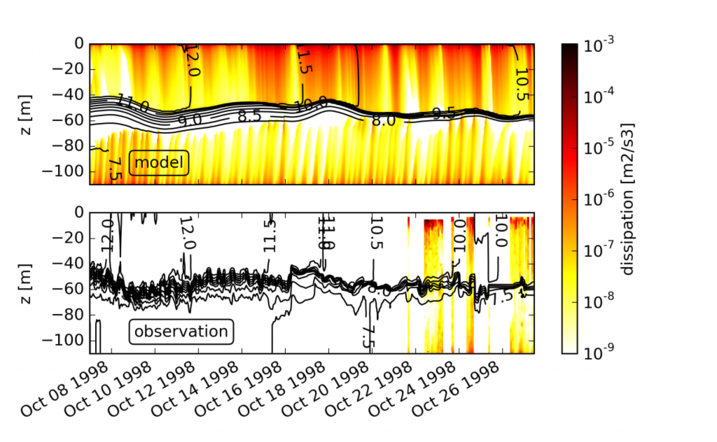 Temperature contours and dissipation rate during 20 days of autumn cooling in the Northern North Sea. The dissipation rate measurements are from the FLY profiler. This plot was created with nns_seasonal.py. [/caption] Two different observed dissipation rate data sets are included: eps_fly.dat: data from a FLY profiler, processed by School of Ocean Sciences, University of Bangor, Wales eps_mst.dat: data from an MST profiler, processed by the Joint Research Centre, Ispra, Italy. These files are read in into GOTM through the eobs namelist in obs.nml. The dissipation rate has only been observed at short intervals, periods without observations are set to minimum values in the files. These dissipation rate observations are read in into GOTM in order to allow for proper interpolation to the temporal and spatial output steps, and they are not used for any type of nudging. The data files are prepared such that the maximum simulation interval can be extended to September 7 at 10.00 h - November 2 at 13.00 h, 1998. For discussions of various model simulations, see Burchard et al. (2002) and also the annual simulation in the test case nns_annual and Bolding et al. (2002).