The observations for this scenario have been carried out by Rippeth et al (2001} in the** Liverpool Bay ROFI** on July 5 and 6, 1999 at a position of 53 deg 28.4’N, 3 deg 39.2’W. The dissipation rate measurements were carried out with a FLY shear probe mounted on a free-falling profiler. Sensors for temperature and conductivity attached to the profiler give detailed information on the vertical density distribution during each cast. Nearby, an ADCP was mounted on the bottom, giving information on the vertical velocity structure. Some accompanying CTD casts were made in order to achieve estimates for the horizontal gradients of temperature and salinity. The surface fluxes are calculated externally by means of bulk formulae of Kondo (1975) , where the sea surface temperature from measurements (FLY profiler) has been used. The bed roughness has been estimated from near-bed ADCP measurements as z0 = 0.0025 m by means of fits to the law of the wall. The external pressure gradient due to surface slopes is estimated according to a method suggested by Burchard (1999) by means of adjustment to near bed velocity observations. The horizontal salinity and temperature gradients for a typical summer situation are prescribed. The observations and model results show a clear SIPS (Strain-Induced Periodic Stratification) cycle with mixed conditions after flood (at high water) and stratified conditions after ebb (low water). The numerical simulations of this scenario have been described in Simpson et al. (2002). [caption id="attachment_592” align="aligncenter” width="633”] 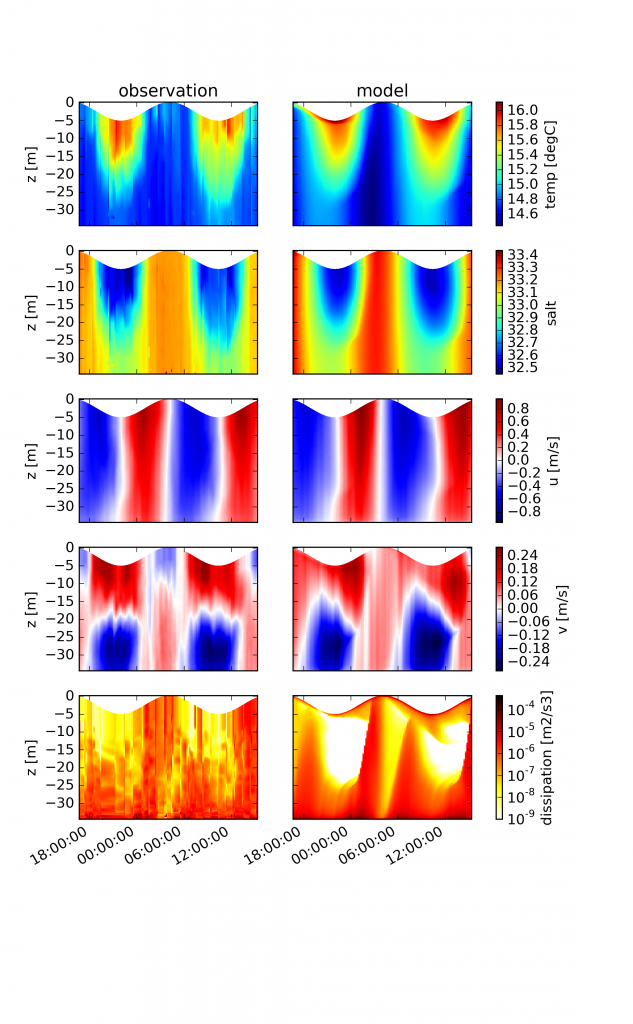 Temperature, salinity, westward velocity, northward velocity and dissipation rate from observations (left) and model results (right) for Liverpool Bay during a SIPS situation between July 5 (16:30h) and July 6 (17:00h) 1999 in Liverpool Bay. This plot was created with liverpool_bay.py. [/caption]